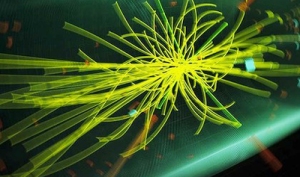 You may have seen that CERN held a press conference on Wednesday (4th July’12), to announce that as near as is ‘absolutely’ certain (at the 5-sigma point), they’ve identified that the Higgs Boson does exist. This is important because it means that all the things we thought we knew about how the universe works are still, as far as we can tell, true. There’s no need to rip up the physics rulebook and begin again. This is a good thing.

So, what’s that got to do with recruitment – an inexact science at the best of times – and what can we draw from it? How are the two linked? Well, perhaps more than you might think.

Link number one: At the end of 2011 I visited CERN for the first time. What an amazing place. Aside from meeting Robert Cailliau, who co-developed the www with Tim Berners-Lee (Robert’s now a bit of a hero of mine and no fan of Facebook let me tell you because at its heart it’s not open source), it was a great opportunity to rub shoulders with other people from around Europe, all interested in the future of recruitment and prepared to share their thinking. You see, that’s the great thing about CERN. Collaboration and sharing are in their DNA – their basic tenet is that we can achieve more together, and they’re absolutely right.

The people attending the conference were there at their own expense to talk about the challenges of recruiting, and to outline their approaches to solving the problems they’d encountered. I think it’s fair to say that we all walked away inspired and informed about how to tackle the new recruitment world.

The presentation I gave (with Marcus Body from Optimal), had four main messages: that there’s more information available to help make the right careers decisions; that employers control very little of this detail; that candidate behaviour is changing because of the availability of information; and, that this new recruitment paradigm has more in common with the way in which recruitment worked before the advent of push messaging. Which only really began as print media came into being in the middle of the nineteenth century.

The future, we suggested, was based on conversation and community, rather than telling (or selling to), an unexpecting audience about a role that we have vacant, and then expecting the most talented people to believe our every word.

Link number two: This one is a bit more tenuous re: the Higgs, I’d grant you, but it’s had recruiters scratching their heads for just as long. What is the one thing that holds the recruitment universe together, but has until recently been just as difficult to measure, see and prove that it exists? Your answer may be different to mine but to my mind it’s candidate sentiment. We’ve spent so many years working out what it is that we (as employers) want, and what we (as employers) want to offer, that we’ve forgotten to ask what it is that the people we need to attract, engage and excite are interested in.

Conversation is as much about listening as it is talking, and if we begin our employment communications by listening to the voices of the people we need to hire or retain, the output of our efforts will be better quality a lower cost and ultimately better ROI from those people.

Social media is of course the route to holding the conversation, but if we carry on just putting out messages that we hope are right, we’re really just creating another monologue. We now have the opportunity as employers to begin to listen, to understand what people think about us now, and what we need to talk about to change opinion or to interest the right people in our offer. This also has the benefit of dissuading those without the right value, competency or skillsets. We can be much more targeted in our talent attraction strategies – less like a random particle collision.

Link number three: Physics is an inter-linked discipline and so is your employer brand, or more specifically, your brand in general. The way I feel about your organisation is based on a combination of factors. If I visit your careers site I’ll also see your main site, reading information about what you do, and how well you do it – so there’s an easy link there to your corporate positioning and your products or services. If I’m still open-minded and engaged, I may well get the opinion of other people – and importantly that’s not just my peer group or those people who advise me about my career. I’m equally likely to go to a place where I can get independent views about you and your business. What will I find there?

Link number four: Knowing that the Higgs exists allows scientists to proceed with greater certainty toward the future. An environment where the ‘dead-ends’ and inaccurate results that might have be reached are less likely. It takes away any doubt. The same applies to your brand and the conversations you may have using it.

By better understanding the community you need to engage with, their needs and preferences, you will be better informed about what your employer brand should be achieving for you – and this will allow you to be much more precise in measuring its effects, and its impact.

Link number five: The absolutely almost certain discovery of the Higgs has been a collaborative process that’s taken many years to achieve. By working together the scientists at CERN and other installations around the world have created a working environment that allows for the long-term benefit of all concerned.

If we begin by looking at the way in which people make career decisions – again starting with the audience rather than we want to get from them – recruitment actually works in the same way.

Logically, people, especially those at the beginning of their career, cannot possibly have a preferred employer. Career decisions begin by deciding that they like the look of an industry or sector or job type – and then they begin looking at the biggest or best employers that match their criteria.  Some employers – like those in the Power sector – are beginning to group together to build sector value propositions to address this, a trend we see growing over time. The have committed to a longer-term approach to solve some big demographic challenges. But, by acting collaboratively they are increasing the visibility of an industry, allowing greater engagement with the people they all need. This has the potential to grab the attention of difficult to reach groups, converting opinion toward the sector and increasing the attractiveness of them all. By working together, sharing budgets and effort, they will all benefit.

So what has the Higgs Boson got to do with recruitment? What can we learn? Arguably more than you might think.